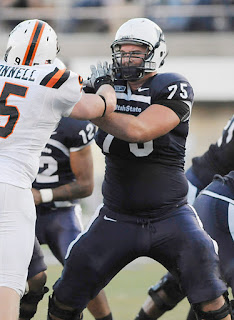 Utah State football player Tyler Larsen has been named to the 2011 Dave Rimington Trophy Spring Watch List, given annually to the nation's most outstanding center in college football.

Larsen, a native of Salt Lake City, Utah (Jordan HS), was named to the second-team Phil Steele all-Freshman Team last season after starting all 12 games at center for the Aggies.  He made all the blocking calls for the USU offense, anchoring an offensive line that helped the Aggies amass 4,168 yards of total offense (347.3 ypg), including 168.7 ypg rushing and 178.7 ypg passing, for a total of 32 TD's.

The USU center is the lone Western Athletic Conference player on the 42-player list, and one of only two centers from the state of Utah, joined by BYU senior Terence Brown.  Larsen is also one of only four sophomores on the list, as there are 23 seniors and 15 juniors.

Larsen is the third Utah State player to be named to the Watch List, joining Brent DeLadurantey in 2005 and Ryan Tonnemacher in 2007.

The winner will be honored at the Rimington Trophy Presentation banquet at the Rococo Theater in Lincoln, Neb. on January 14, 2012.

USU opens the 2011 season on Saturday, Sept. 3 at defending national champion Auburn. The Aggies will tangle with the Tigers for the first time ever and be USU's first Southeastern Conference opponent since Arkansas in 2006.

Utah State's home opener is on Saturday, Sept. 10 at 6 p.m. (MT), taking on in-state foe Weber State, marking the first time that USU and WSU have squared off since 2001, and Utah State leads the all-time series, 11-1. The Aggie-Wildcat match-up will have special meaning for Andersen, who will be facing his mentor, Weber State head coach Ron McBride. Andersen played for McBride at Utah in 1985-86.

About the Rimington Trophy

Dave Rimington, the award's namesake, was a consensus first-team All-American center at the University of Nebraska in 1981 and 1982, during which time he became the John Outland Trophy's only double winner as the nation's finest college interior lineman. For more on the Rimington Trophy and a list of past recipients, visit www.rimingtontrophy.com

The Rimington Trophy is a member of the National College Football Awards Association (NCFAA). The NCFAA was founded in 1997 as a coalition of the major collegiate football awards to protect, preserve and enhance the integrity, influence and prestige of the game's predominant awards. The NCFAA encourages professionalism and the highest standards for the administration of its member awards and the selection of their candidates and recipients. For more information, visit the association's official website, ncfaa.org.