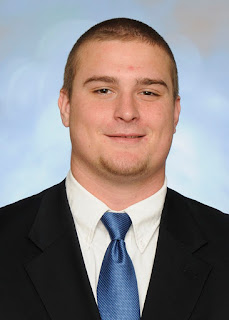 Logan •Tyler Larsen went hard through a full practice on Tuesday morning. He played in an intrasquad scrimmage and, for good measure, went the length of the field four times practicing snaps with quarterbacks.
Yes, you could say that Larsen is putting in work.
A redshirt sophomore at Utah State and a former star at Jordan High, Larsen has more responsibility than any other sophomore on the team. He’s the leader of the offensive line, a much-maligned group at USU. He’s the Ags’ best lineman and considered one of the top centers in the Western Athletic Conference. And if the group is to finally have success this year, it’s got to start with him.
"I feel the weight is on my shoulders, that’s for sure," Larsen said. "It’s given me more motivation to keep working hard.
It’s incredibly important that we work hard this year. We didn’t have nearly enough rushing yards last year. We have to keep getting better and better."
Being healthy should help the unit as a whole. Oscar Molina and Tanner Richins are back after injury caused them to miss much of 2010. Richins is slated to start at a tackle spot, while Molina could start at one of the guard spots. Stetson Tenney, a junior college transfer, is at another tackle spot, and coaches have been happy with his progress.
However, it all revolves around Larsen, who has made several preseason watch lists, and who the coaching staff thinks has NFL potential. Last season, the line was too often dominated. Too often quarterback Diondre Borel was forced to scramble for his well-being.
Having running back Robert Turbin return from a torn ACL should help, but the line knows it has to hold up for this team to be successful.
"They are hugely important," offensive coordinator Dave Baldwin said. "We’ve got weapons in the backfield. Kerwynn Williams was our best running back last year. Now he’s our No. 3 guy. So I’m comfortable there. We have to be able to run-block. If we can do that, we can play-action and be able to do some things."
Jacobs impresses
Receiver Chuck Jacobs made a big impression in practice for the second straight day. The junior caught a touchdown pass from Chuckie Keeton and turned a screen pass into a big gain in the scrimmage portion of practice. He and former Timpview star Travis Van Leeuwen are both placing considerable pressure on Travis Reynolds for one of the starting receiver positions.
"Chuck is swimming a bit because we’re throwing stuff at him," Baldwin said. "But he’s out there making plays."
The quarterback battle
Freshman quarterback Alex Hart ran the first team and was relatively mistake free, though he did almost throw two interceptions. Junior Adam Kennedy played with the second team, while Keeton took the remainder of the reps.
tjones@sltrib.com
Twitter: @tonyaggieville