Tyler's Mad Props In the The Salt Lake Tribune

USU football: Once beaten down, Aggie offensive line fights back 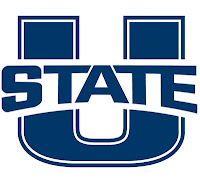 Verbally, the beatdowns would usually happen something like this: The Aggies’ offense would meet and go over film. The coaches would watch the film. The coaches would then stop the film and start yelling at their line for being soft, not opening holes and being an unintentional roadway for opposing defenses to pad their quarterback sack statistics.

That can be grating after a while.

“It got to the point where we were yelled at almost every day,” sophomore center Tyler Larsen said. “Eventually, we got tired of it, and decided to do something about it.”

For the first two years of coach Gary Andersen’s tenure at USU, the offensive line was one of the big weak spots. The Aggies consistently lost games in the trenches, despite playing in front of terrific running backs like Robert Turbin, Kerwynn Williams and Michael Smith.

That’s all changed this year. With Utah State preparing to face Ohio on Saturday at the Famous Idaho Potato Bowl, the Aggie offensive line has become a strength. Where it used to be pushed into its own backfield, it now opens holes. Where now-departed quarterback Diondre Borel used to run for his life, Adam Kennedy often throws from a (relatively) calm pocket. Where the running backs used to have to create lanes for themselves, they now find alleys that didn’t exist in previous seasons.

Now, the USU O-line is seen as a strength. Proof is in the fact that Larsen, a possible NFL prospect out of Jordan High, and senior guard Philip Gapelu were both named first team All-WAC.

“I am so proud of that group,” Andersen said. “It’s all started in the weight room and with their work ethic. They have made such strides. I can’t say they are the biggest. And they still aren’t the strongest. But their toughness in the fourth quarter has shined through this season in a big way.”

Not many knew it at the time, but the USU offensive line announced itself against Auburn, on one of the first possessions of the season, and continued from there.

In a short-yardage situation, the Aggies opened a crease for Williams, who scampered untouched for Utah State’s first touchdown of the year. The play went 43 yards and foreshadowed just how good a running team the Aggies would be this year.

For the season, Utah State has run for a total of 3,330 yards, more than twice as many as its opponents. Turbin, the WAC offensive player of the year, rushed for 1,416 yards. Smith went for 713 and Williams rushed for 480, despite missing a significant amount of time due to injury.

“We wanted to make sure that we could help the running backs out,” Gapelu said. “Our backfield was so talented that we knew that all they needed was a tiny opening and they were gone.”

The evolution of Utah State’s 2011 offensive line started two months before preseason camp, in the sweltering heat of USU’s practice facility. Without prodding, the entire line returned to school early to hit the weight room, do drills, work on group chemistry and get better.

That never happened before, the entire line returning without it being mandatory. But it turned out to be the best thing that could have happened for this group. Playing eight guys, not a big number these days for an offensive line rotation, they were at their best in the fourth quarter. They consistently wore down opponents because they were in better shape.

Not surprisingly, the Aggies were able to move the ball on the ground when it counted most. In USU’s bowl-clinching win over Nevada, the Aggies ran out the last five minutes of the clock running the ball exclusively.

Utah State set single-season records for rushing yards and total offense this season. And right there, in the thick of it all, was a USU offensive line that just 12 months ago was seen as a major weakness.