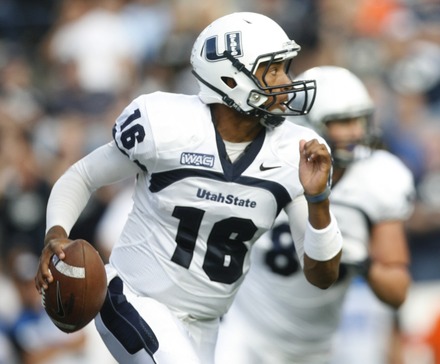 Logan • In the midst of all the hoopla and happiness surrounding Utah State’s move to the Mountain West Conference earlier this month, Gary Andersen laid down an emphatic challenge.

Andersen said he fully expects the Aggies to be competitive in 2013. He expects to win right away, and he expects to have a deep and talented roster that will make the transition smooth.

Mind you, Utah State is still a little more than three months from its final season in the Western Athletic Conference. But with a roster that is young but talented, the Aggies could be peaking just as they make their conference switch.

“At the end of the day, next year stands by itself,” Andersen said. “We have to make sure that we’re ready to play well next year. But we know what we have for 2013, and we have an opportunity to recruit for a year. Being in the Mountain West isn’t going to win us recruiting battles. But it could open some doors that wouldn’t have been there previously. We have to be prepared to take advantage.”

He has reason to be optimistic. Chuckie Keeton, a rising sophomore quarterback, will be an upperclassman when it’s time to make the switch. His presence will give the Aggies an established leader at their most important position.

Tyler Larsen, perhaps the best offensive lineman in the WAC, will be a senior in 2013, and coaches feel the former Jordan High star will develop into an NFL prospect at center by then.

Andersen looks at linebacker Tavaris McMillian the same way he looked at Bobby Wagner when he was a sophomore — like a future star. Indeed, 2012 will be the first year that McMillian starts in Wagner’s inside spot. He should be a veteran by 2013.

Then there’s Nevin Lawson, who has started since he was a freshman at cornerback. He will be a senior by the time Utah State makes the jump to the MWC.

Familiarity may be the most important factor in all of this.

Andersen made his coaching name in the MWC as Utah’s defensive coordinator. He knows the lay of the Mountain West land and what his program will be walking into.

Last season, Utah State handily defeated Wyoming at Romney Stadium and narrowly lost to Colorado State. In a few months, the Aggies will travel to CSU and will face UNLV at home. With Boise State heading to the Big East, there is no dominant program in the league.

The Aggies are hoping to take advantage of that when they make the switch.

“We have another year to develop the young kids, and that’s going to be big,” Utah State athletic director Scott Barnes said. “The overall depth of the roster is so much more different than when Gary took over. I think the ability to make an impact is enhanced even more.”