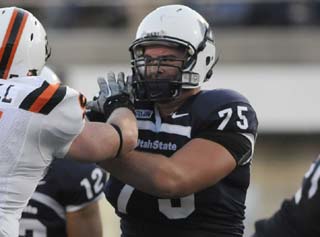 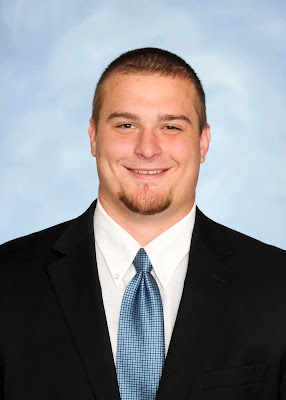 The candidates earned a place on the Official Watch List by: earning All-American honors last season; being named last season to their respective all-conference first team as determined by the conference’s head coaches; being projected to be an All-American or first team all-conference player for the coming season; or by nomination approved by the nominations committee.
Larsen is one of five Western Athletic Conference players on the Rotary Lombardi Award Watch List, joined by Louisiana Tech center Stephen Warner, San Jose State defensive end Travis Johnson, San Jose State offensive tackle David Quessenberry and San Jose State linebacker Keith Smith. He is also one of four players from the state of Utah, joining Utah defensive tackle Star Lotulelei, BYU offensive guard Braden Hansen and BYU linebacker Kyle Van Noy. Overall, Larsen is one of 145 players on the list.
A native of Salt Lake City (Jordan HS), Larsen enters his junior season with 25 consecutive starts at center. In 2011, Larsen was a first-team all-conference selection by not only the WAC, but by Phil Steele's College Football Magazine as well as the BCS Busters and College Sports Madness. Larsen made all the blocking calls and assignments in helping clear the way for the 2011 USU offense that established school records for total offense (5,945 yards), rushing yards (3,675), total points (437) and total touchdowns (60). USU led the WAC and ranked sixth in FBS in rushing offense (282.7 ypg), along with ranking second in the WAC and 20th in FBS in total offense (457.3 ypg).
As a sophomore in 2011, Larsen led the offensive linemen with an 89 percent overall performance grade, including 80 percent in technique and 88 percent in effort. He also carried out the right assignment 98 percent of the time, including five games where he graded out at a perfect 100 percent. Overall, Larsen graded out above 90 percent six times in total performance, five times in effort and two times in technique, as well as all 13 games in assignment. He finished the season with 65.5 knockdowns including a season-high eight at defending national champion Auburn.
The Rotary Lombardi Award Watch List is a reference tool for the Selection Committee. It will be periodically revised until the first round of voting is completed. The first round of voting determines the Top 25 Quarter finalists for 2012.   The second round of voting will determine the final 7 semi-finalists or "Seven Blocks of Granite".  The third round of voting will determine the "four- finalists from the "Seven Blocks of Granite".  The fourth and final round of voting will determine the winner of The 43rd Rotary Lombardi Award which will be announced on national television live in "prime-time" 8-9 PM (CST) Wednesday, December 5, 2012 at The Hobby Center in Houston, TX (network to be determined).
Utah State football season ticket renewals and new sales for the 2012 season are available. Renewals are available online 24 hours a day at www.UtahStateAggies.com and clicking on the "buy/renew tickets" under the "tickets" drop down menu. Fans interested in new sales should contact the USU Ticket Office at the Dee Glen Smith Spectrum or by phone by calling 1-888-USTATE-1 or (435) 797-0305.
Fans can follow the Aggie football program at twitter.com/USUFootball or on the USU football blog at usufootball.wordpress.com. Aggie fans can also follow the Utah State athletic program at twitter.com/USUAthletics or on facebook at Utah State University Athletics.
-USU-