Across the Aggie Sidelines | KSL.com

Across the Aggie Sidelines: Scouting the SUU Thunderbirds

He was one of the greatest interns I've ever had, and Aggie nation is indebted to him for that video.
Now to business, instead of breaking down and going into depth about the Aggies this year, I am reminded of a quote form Sun Tzu:
"It is said that if you know your enemies and know yourself, you will not be imperiled in a hundred battles."
Now it's fair to say that I spend an unhealthy amount of time reading about the Aggies; and odds are, if you're reading this article, you're same way. We know ourself, as Sun Tzu would say; therefore, this season I will help you "know your enemy" by giving you a breakdown of our opponent each and every week. So that as fans, when we watch the game, we will not be surprised by what we see, we will expect the unexpected, and we will sound intelligent to our friends we watch the games with.
Game 1: Southern Utah University


-Cody Larsen: Without a doubt, the most interesting sub-plot of this game is the matchup of SUU's defensive tackle Cody Larsen, lined up against his younger brother Tyler Larsen, Utah State's center. In my mind I'd like to think this matchup is dramatic as the climatic scene of the movie "Warrior," where brothers Tommy and Brendon fight each other in the octagon in such a powerful, moving way; I'm brought to tears just writing about it. However, I think I'm setting my standards too high. Jeremiah Jensen did a great feature on them, give it a watch. 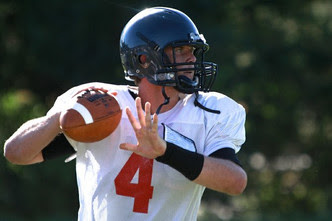 SUU quarterback Brad Sorensen has found himself in a swarm of preseason media attention, while trying to figure a way to stay humble and focused on the upcoming season. Photo by Asher J. Swan, SUU
-Brad Sorensen: If USU's defense is as good as it's being touted, they'll have a pretty good test in week 1. Sorensen is the reigning Great West Offensive Player of the Year, just take a look at some of these accomplishments: First team all-GWC, 288 of 425 passes for 3,143 yards and 17 touchdowns. To give his numbers some perspective; of the all the other QB's in the state, Mike Hoke was the closest in yards (2,499) and touchdowns (19) along with Riley Nelson (1,717). Jon Hays (1,459 and 12), Chuckie Keeton (1,200 and 11), and Adam Kennedy (972 and 11). Sorensen's 3,143 yards through the air for the 2011 season rank number 2 in SUU's history; second only to....HIMSELF! In 2010 he set the school record for yards in a season with 3,170. To put this as poignantly and eloquently as I can; dude, can throw. The Aggie defense can't take their passing game lightly. They'll try to use the pass to set up the run and they'll be successful if the front seven can't get pressure. Which brings me to my final point...
With all this said, I still don't see SUU hanging with Utah State for very long. The Aggies finally have depth at every position and for the first time in a long time, they are putting a lot of playmakers on the field, on both sides of the ball. While SUU does have some really talented players, they don't have the depth of talent Utah State does.