A family affair: Larsen brothers square off in season opener 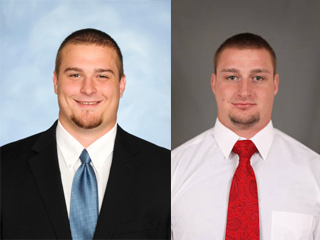 LOGAN— Cody and Tyler Larsen both love the game of football, and grew up playing together at Jordan High School. The brothers played both ways for the Beetdiggers, anchoring the offensive and defensive lines.
Thursday, when the Utah State Aggies and Southern Utah Thunderbirds begin their respective seasons, the Larsen brothers will be going head-to-head – literally.
Cody began his career at Southern Utah University in 2009 after returning from an LDS Church mission. As an interior lineman on the defensive line, the 6 foot 4 inch, 300-pounder started all 11 games and finished third among defensive linemen with 22 tackles. Now a senior, he’s looking to earn final bragging rights against his little brother.
Fresh out of high school, Tyler also began his freshman year in 2009 as an offensive lineman for the Aggies. After playing in the first two games, however, Tyler suffered a season ending injury and missed the rest of the year – including a game against SUU. Now a junior and one of the top offensive lineman in the country, the 6 foot 4 inch, 312-pounder is hoping for bragging rights of his own.
Tyler said that as the younger brother, he has always been the picked on one. However, Cody didn’t quite see it that way.
“That wasn’t always the case, because he was always a little bit bigger than me,” Cody said. “I could flip it around say that I was always the one that had to work hard because I had a big little brother.”
After returning from his freshman year injury, Tyler has started 25 consecutive games at center for the Aggies. That position puts him in prime position to spend a lot of quality time with his brother in the season opener.
“It’s definitely going to be a high level of competition between us. Since high school, we were playing on the same side of the ball, but it’s a little different story now, just going head to head,” Tyler said. “I have mixed emotions. I don’t know how it’s going to be. It’s going to take two or three plays to get used to it and then finally realize, okay, here we go, it’s game time.”
Off the field, the brothers have certainly been gearing up for the game, as they trash talk with each other and joke around. Cody said their ribbing is only directed towards each other, and not towards who plays for what school.
“He always keeps to himself a little bit, so I think I do a little bit more of the trash talking. He holds his own, and he’ll say a few things,” Cody said. “It’s more just the physical aspect, man on man, and not the fact that we’re at different schools.”
Even if the two brothers weren’t going to be lining up across from one another, the pair wouldn’t have a hard time tracking each other down as they both wear the same number on their jersey – 58.
Tyler said that in high school, he wore 58 while Cody wore 59. However, when Cody arrived at SUU, 59 was taken so he took the number closest, Tyler’s 58. Tyler continued on with his 58 as an Aggie, and now it has turned in to a family tradition.
“Now it’s basically become a family number,” Tyler said. “My little brother in high school has it, and my little brother in little league has it. Fifty-eight is the number to be I guess.”
All the trash talking and joking aside, both brothers said they were excited to be playing each other in the upcoming game and that it would be a unique experience.
“I just can’t wait to be out there with him,” Tyler said.
Cody shared a similar sentiment, but also added a “good luck Tyler” for his brother.
The Aggies and T-Birds kick off their season Thursday night on Merlin Olsen Field in Romney Stadium at 6 p.m.