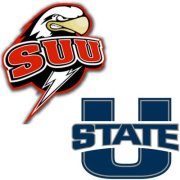 The first time that the Larsen brothers put on football pads together, eight-year-old Tyler got a very rude awakening to full-contact football from his older brother Cody.
“It was funny,” Cody said of that first day. “I ran over him a few times and his eyes were wide open, and then I let him take me down a few times.”
The two have come a long way since the then 11-year-old Cody got the green light from his dad to ring his little brother’s bell out in the yard. They’ve both grown up and done plenty more competing with each other, and they are now both in the middle of some impressive college football careers.
Tyler is coming off a season where he earned first-team all-Western Athletic Conference honors and finds his name on a handful of watch lists for national college football awards. He has started 25 consecutive games at center for Utah State and is the cornerstone of theAggies’ offensive line.
Cody has plenty of accolades too from his past three seasons anchoring the defensive line for Southern Utah. After being named to the all-Great West Conference first team for the past two years, Cody has been named to numerous preseason Football Championship Series (FCS) All-American teams entering the 2012 season.
In Thursday’s season-opening game between the Aggies and Thunderbirds in Logan, the Larsen brothers will bash heads for the first and only time as college football players. For two brothers who have spent their entire lives competing with one another both on and off the football field, this game will likely bring some major clout in their ongoing competitions.
“I don’t even know if I have words for it,” Tyler said when asked to describe the competitive nature growing up between him and his older brother Cody.
Whether it was wrestling, eating, weight lifting or playing basketball, Tyler says that he and Cody were always going at it. And while a three-year age difference might make things lopsided in most sibling rivalries, that wasn’t the case with these two.
“When we were a little bit older going into high school, Tyler was always a little bit bigger than I was, so I always had something to prove,” Cody said. “But me being the older brother, Tyler always had to try to prove something too.”
Those high school years for Tyler began much in the same way as his first day of little league football with a head-to-head battle against his older brother.

“His first practice his freshman year, when I was a senior, it was kind of a rerun of that,” Cody said. “I ran him over a few times and told him, ‘Welcome to varsity football.’ After that, he handled himself just fine.”
That season marked the only time to date that Tyler and Cody have shared a football field with both of them playing key roles for the defense at Jordan High School during the 2005 football season.
“My freshman year, when he was a senior, we played the same position against Alta,” Tyler said. “We both started, and we were both defensive ends. That was really cool.”
In that first game starting together, the Larsen’s marched onto their rival high school’s turf and came away with a 27-23 win against the Atla Hawks. They went on to clinch a region title as well that season. The younger of the Larsen’s had become an impact player right alongside his older brother, something Cody believes he had a hand in, much like most older brothers would.
“Oh absolutely," he said. "I made sure he ate well and beat him up enough that he’s as tough as he is because of what I did to him.”
After impressive high school careers, the brothers both landed at college football programs in 2009. Tyler was a true freshman at Utah State, while Cody was a freshman at Southern Utah after a two-year LDS Church Mission. The brothers appeared destined to finally share the gridiron once again, this time as opponents, with the Aggies facing the Thunderbirds in the team’s third game that season. But with the worst of timing, Tyler suffered a season-ending injury in USU’s second game that year at Texas A&M, derailing the would-be meeting between the brothers.
“I was so excited. We both were,” Tyler said of the anticipation for that 2009 match-up. “We were just as excited as we are now, so it was a big blow.”
Now, both players are healthy and decorated veterans of college football, and both are hoping to get the best of their brother one last time.
“This year, it’ll be that much more intense now that we’re both playing and going head-up against each other,” Cody said.
Despite their competitive nature with each other, and after all these years away from home and attending universities on opposite ends of the state, the two brothers haven’t let distance affect their relationship. Whether they’re bragging about personal accolades to each other over the phone or enjoying what little time they get to spend together, brotherly love prevails.
“We’re very close,” Tyler said. “We’re always hanging out whenever we’re at our parents’ house and going lifting together or trying to do position work together, so we’re very close.”
The two are so close they even have the same idea of how they’ll react when the USU offense breaks its first huddle Thursday, and the two brothers line up across from each other.
“For me, I’m going to get in my stance, look at him, and I just know I’m going to start laughing because it’s so unreal to me," Tyler said.
Cody anticipated the same thing.
“I guarantee he’s going to start laughing," he said. "No matter how nervous he is or how nervous I am, I’ll say something or just give the look, and I think he’ll giggle a little bit. Then it’ll be all down to business after that.”
Whoever gets the last laugh in this next chapter of the Larsen brothers’ sibling rivalry could be a big one with Thursday being the last foreseeable time the two will share a football field together.
Doug Hoffman is the assistant athletic director for Utah State University Athletic Media Relations.