Looking into the Packers Crystal Ball: Future Help at the Center Position 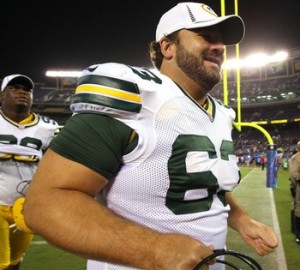 Now that TJ Lang has signed his contract extension, the Packers have 3 of their 5 linemen secured for the foreseeable future.  He joins Josh Sitton and Bryan Bulaga as the 2 other pieces of the OL who are at least signed through 2014.  If the team wants to capitalize on the gangbuster talent on the offensive side of the ball, the O line will be key.  So 3 of the 5 pieces are set.

The left tackle position remains in flux with Marshall Newhouse and Derek Sherrod battling injuries and rookie Andrew Datko very green so far this camp. The Pack brought in veteran free agent center Jeff Saturday this offseason.   Saturday is signed for 2 years and can hopefully remain durable and effective.  But it goes without saying, the team will need to find someone to step in when Saturday retires.  It also goes without saying that the offensive center is invaluable in a pass-heavy offense.  Let’s take a look at a few prospects the Pack may have their eye on this Fall and as they prepare for the 2013 draft.

While Barrett Jones (Alabama) will be at center for the Crimson Tide this year and is a Jacobs Blocking and Outland Trophy winner, he is not part of this discussion.  He is projected as a Guard in the NFL so let’s focus on a few guys who very likely remain at Center when they get to the next level.

Khaled Holmes, USC (6’3”, 310 lbs) – The book on Holmes is that he’s a much better pass blocker than run blocker.  In the Pack’s offense and as long as #12 is QB, that may be enough to warrant a long look.  He’s not very athletic and has trouble bursting off the line but is a smart player.  He displays very good footwork in pass protection and gets set quickly.  Holmes is said to be very good on the outside running the screen.  It wouldn’t be a bad thing if the Pack’s screen game got a boost.  Early projections have him going late in round 1, right where the Pack hope to and should be come next year’s draft.

Travis Swanson, Arkansas (6’5”, 271 lbs) –  He’s an athletic player and has good hands.  Engages his man at the line and puts up a good, initial fight but he relies on stonewalling his man.  If not, he tends to struggle.  He plays too high at times and has balance issues as he loses leverage trying to stay on run blocks.  Swanson may be better suited for Guard at the NFL level unless his pass protection improves.  He has trouble at times with active pass rushers, which the NFL is full of.  Swanson would be a project for a team wanting to insert him at Center.  Depending on how durable Saturday proves to be and Sampson Genus develops, the Pack may or may not have that luxury.

Mario Benavides, Louisville (6’4”, 280 lbs) – Benavides is an extremely physical player.  He exhibits strong leadership attributes and is tough.  Has played through some dings.  His game is predicated on out-muscling his man.  He’s very chippy and has a lot of “nasty” in his game.  Has good hands and likes to latch on at the snap and get his guy to the ground.  He tends to block the same in run and pass protection and his pad level gets higher than it should be.  He’s the kind of lineman you love to hate if he’s not on your side.  Could be the target of the zebras’ flags if not careful with his brawler style.  He tends to be a straight-ahead blocker versus pulling.  If he struggles in pass protection, he could be developed into a guard at the next level if he can clean up his game a bit.  He reminds me a bit of Breno Giacomini so it’s a possibility that the Pack check him out.

Tyler Larsen, Utah State (6’3”, 302 lbs) – Another project guy who has the attributes but will need to refine his game.  Plays hard and seeks out his man in space but is inconsistent with his hands at times.  Needs to work on leverage and balance.  He pulls well and could give a boost to the Pack’s run game.
Jason Perone is a guest contributor for AllGreenBayPackers.com