Tyler Weighs In On the Battle for QB


Editor’s note: This is the final in an eight-part series previewing Utah State’s football team by position.
Chuckie Keeton is ready to get back to playing on a consistent basis again.


Utah State’s sophomore quarterback was injured Nov. 5, 2011, at Hawaii and didn’t get very much playing time after that.
So for Keeton, Thursday’s 2012 season opener against Southern Utah can’t get here fast enough.
“It’s really exciting,” Keeton said. “It’s kind of weird because sometimes quarterbacks forget how it feels to get hit, but for some reason, it’s kind of a good experience just because you’re back into the game. I don’t think it’s going to be too much of a shock because I’ve been through camp and I’ve been through spring ball.”
USU head coach Gary Andersen and the Aggies are in a position they quite possibly have never been in before at quarterback with the return of two tested and proven starting quarterbacks. 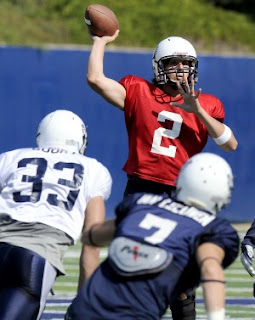 After Keeton went down last season, Adam Kennedy took over the reigns and did not disappoint as he helped orchestrate a five-game winning streak to end the regular season and send the Aggies to the Famous Idaho Potato Bowl.
“It’s a good feeling because we both prepare with each other, so we kind of know what each other is thinking and what to look for,” said Keeton, referring to the fact either he or Kennedy could be the starting signal caller. “Any time we come off to the sideline, we’ll talk about what happened during the series. It’s just good to have some support with you no matter what. It’s one of those competitions where, like you said, it’s going to be a good situation no matter who comes out on top.”
Andersen agreed.
“Chuckie is playing well and Adam is playing well,” Andersen said toward the end of fall camp. “... They’re both still getting a bunch of reps, they’re both getting enough reps to be the starter and that’s the way it’ll be all the way through to the end.
“We don’t need to wear one of these kids out with as many times as they’re going to throw the football. We expect them both to be in a position to play at any moment and that’s how they’ll prepare.”
Keeton became the first-ever true freshman to start at quarterback for USU when the Aggies took on Auburn last season.
During his injury-shortened season, Keeton completed 60.9 percent of his passes for 1,200 yards and 11 touchdowns, compared to just two interceptions in nine total games.
Kennedy completed 69.1 percent of his passes for 972 yards and 11 touchdowns. He also threw four interceptions.
For Tyler Larsen, the Aggies’ junior center, he knows there is no letdown from either quarterback.
“Chuckie is doing great and he’s got that confidence that he showed at Auburn,” Larsen said. “You’ve got Adam and the confidence he showed in Hawaii and the leadership he has. It’s great having both guys there.
“They’re both great guys and awesome players. It’s great to have them.”
What do the quarterbacks want to accomplish in 2012?
“Last year we had a pretty decent season as far as passing efficiency, so we definitely want to keep that up,” Keeton said. “I believe we were in the top 25 last year. Personally, we haven’t set certain goals, but I know passing efficiency is something me and Adam have looked forward to and having it become sort of a reputation at Utah State.”
Anything else?
“Another goal that we have is to have a touchdown-to-interception ratio of at least three to one,” Keeton said. “It’s somewhat of a high-set goal, but if we achieve it, we will be better as a team.
“The team goal is winning a WAC championship and winning a bowl game, not just getting to a bowl game. That’s way different than we thought last year.”
Under Keeton and Kennedy in 2011, the Aggies set school records for total offense (5,945 yards), rushing yards (3,675), total points (437) and total touchdowns (60).
Joining USU’s two proven starters at quarterback is former Logan High standout Jeff Manning, who was named the Region 11 Offensive MVP as a senior in 2008.
“Jeff Manning throws a really good ball,” Keeton said. “He has one of the better balls out of all our quarterbacks, including me.”
Other Aggie signal callers include freshman Mike Chislock and Snow College transfer Craig Harrison.