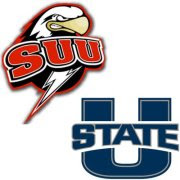 LOGAN — Thursday night marks the beginning of the college football season across the country and for the first time since 2007, Utah State will kick off the season at home. The Aggies will face in-state foe Southern Utah at 6 p.m. on Merlin Olsen Field at Romney Stadium.
"Looks like the weather is going to be great, the students are just back, I mean I couldn't really write a script that is better for the first game of the year for us," head coach Gary Andersen told reporters on Monday.
For two teams that have only faced each other twice in school history, the programs have a lot in common. With a combined 90 players from the Beehive State between the two squads, there are countless high school rivalries and friendships on the field. None are bigger than in the trenches where Aggie offensive lineman Tyler Larsen will face his brother, Thunderbird defensive lineman Cody Larsen.
"It's going to be an incredible experience being out there and playing against each other," said Tyler. "I'm looking forward to it. There might be some little jitters, but after the first play I'll remember that it's just another game, just like playing against any other guy."
Southern Utah is full of great memories for the fourth-year Aggie head coach. In 2003, Andersen got his first taste of being a head coach in Cedar City, leading the Thunderbirds to a 4-7 record. The record may not have been as good as he would have liked, but he still looks back at that season fondly.
"I had a great experience with Southern Utah," Andersen said. "… It is a tremendous city, it has a fan base that loves athletics in general and obviously they have a president and athletic director, in my opinion, and a head coach that is allowing them to take the next step. It is just great to see."
The positive memories for Andersen also relate back to the last time these two programs met in 2009. Andersen coached his first home game at the helm of the Aggies and also collected his first win, 53-34.
A lot has changed since that game just three short seasons ago. Southern Utah is coming off a 6-5 season and has moved up from the Great West to the more regional and more prestigious Big Sky Conference.
Utah State has gone from also-rans to bowl game expectations in the last three seasons. The Aggies expect to challenge for the final WAC championship before moving to the Mountain West in 2013.
Andersen has not announced his starting quarterback for the opener, but it is expected to be sophomore Chuckie Keeton who has impressed during fall camp. Keeton will lead a retooled offense that after losing two running backs to the NFL will still look to pound the rock, but also challenge opponents through the air with an amazingly deep and talented group of skill players including Matt Austin, Chuck Jacobs and Kerwynn Williams.
On defense the Aggies have turned up the aggressiveness and will look to create more turnovers after struggling in that department last season. Linebacker Tavaris McMillian will take over for the departed Bobby Wagner and lead one of the most athletic Aggie defenses in recent memory.
Season-opener
Southern Utah at Utah State
Thursday, 6 p.m. MT
Romney Stadium, Logan
TV: KMYU
Radio: 97.5 FM, 91.1 FM