5A high school football: Jordan registers a record-breaking victory over Syracuse to claim 5A title 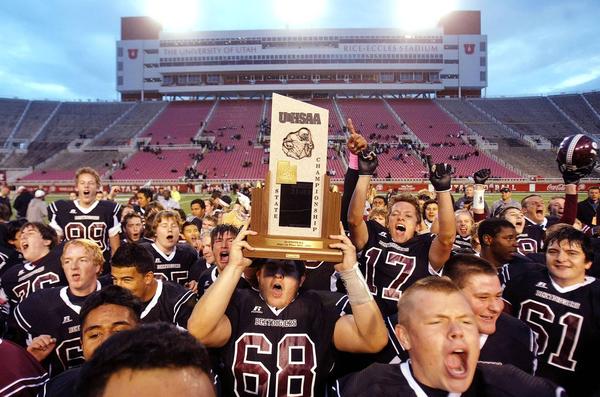 SALT LAKE CITY — As Syracuse’s players took the field minutes before the 5A state championship against Jordan at Rice-Eccles Stadium Friday, they were ushered by a white Titans flag.
In an unprecedented runaway, the Beetdiggers transformed Syracuse's flag into a white flag of surrender in their record-breaking 58-2 win over the Titans. With the landslide victory, Jordan clinched its 12th title in school history and first since 1994.
“I’m just really happy for our kids. This is incredible what they’ve done — the amount of time and effort that they’ve put forth into this season,” Jordan coach Eric Kjar said while shedding tears of emotion. “To see them achieve what they deserve and what they’ve worked for makes me happy. There’s no other feeling in the world like this for this group of young men. I couldn’t be happier for them. I love these kids."
The ‘Diggers scored touchdowns on their first eight possessions against a Syracuse defense that had only conceded 70 total points during the entire regular season to take a 51-0 lead at halftime. Jordan's 58 total points and 56-point margin of victory are both tied for second all-time in Utah prep championship-game history.
“They’re the best team we’ve faced all year,” Syracuse coach Russ Jones said. “Not anything against the rest of the teams we’ve played, but they’re very, very physical, very well-coached and they’ve got some good-looking athletes.”
Jordan held Syracuse to minus-5 yards rushing, while only allowing 62 total yards — the fourth fewest all-time. Its seven sacks tied for the most in title-game history.
“We didn’t expect that — we know that they’re real good,” Kjar said. “Our kids were really hungry. They felt challenged and wanted to go out and finish things off the right way and they did a tremendous job of coming out. We wanted to be aggressive with our game plan and our kids did a great job of executing.”
On the opening series, quarterback Austin Kafentzisorchestrated a nine-play, 68-yard drive that culminated with a 32-yard slip-screen to Clay Moss for a TD.
Kafentzis then added touchdown runs of 1, 6 and 2 yards and scoring throws of 21 and 30 yards, both to junior receiver Mason Krueger. Moss and Krueger combined for 359 all-purpose yards and five scores.

Kafentzis finished with 279 total yards and his six touchdowns tied Dixie’s Blake Barney — who had just played several hours earlier — for the most individual scores in championship history.
“I definitely feel like this has been one of my best performances, but you can always get better,” Kafentzis said while holding the championship trophy to his chest. “I don’t want to stay this way — I want to get better next year and prove that I’m not just a high school quarterback.”
The senior offensive line — B.J. Cavendar, Tyshon Mosely, Zach Larsen, Ian Moes and Aarron Reupena — paved way for Jordan's 478 total yards. In all 13 games this season the 'Diggers scored at least five touchdowns.
“After that loss to Lone Peak last year in the semifinals we made a goal to take the state championship and get together as a group,” Mosely said. “We did it (and) it feels so good. Everyone has that ultimate goal to take the state championship but we knew we could do it — no doubt in my mind.”
The Beetdiggers' lone loss of 2012, the result of a missed PAT attempt, came at the hands of the No. 1-ranked team in the nation, St. John Bosco, Calif., 35-34 on Sept. 29.
With eight returning starters — all significant contributors — returning for 2013, repeating next year is an extreme possibility.
“I haven’t even thought about that quite yet. I know that we got a lot of players defensively but I lose those guys up front. That’s a big loss,” Kjar said. “But not even worried about that yet. A bunch of stress off me right now. When you have a good team like this you want make sure you capitalize and finish the season the right way. (It's) a big weight off.”