SUU first season in the Big Sky came to a thrilling conclusion on Saturday, when the T-Birds defeated Northern Arizona 35-29 in triple overtime. It couldn't have ended any better for SUU seniors, with Cody Larsen ending the game with a fourth down sack and Brad Sorensen leading the sideline onto the field as a dog pile formed over Larsen.

"SUU!" chants erupted from the few who migrated from Cedar City to root on the T-Birds.
It was about as perfect as anyone could end a season without winning a championship — but at least a trophy was involved. 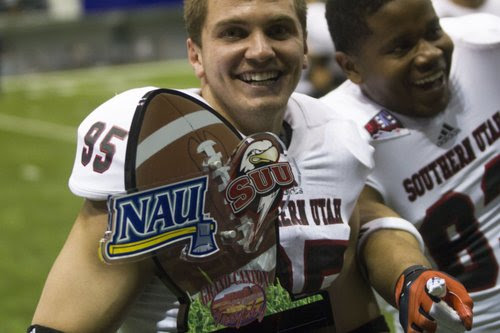 by Carter Williams
Some call it senior magic when Larsen ends the game with the big sack, while Sorensen ran for a touchdown and threw for two more in overtime. But around SUU, we just call it the "Cam Levins effect."
Levins wins his final two races as a T-Bird, Stacey Brinkman scores the record-breaking goal in double overtime in her final game, and almost every senior Saturday had a major contribution to SUU's upset win over the 'Jacks. (Just imagine what Ana Mailoto and Cashaana Renfron will do next...)
Some call SUU's season a success, but in many ways, SUU football's first season in the Big Sky boils down to "shoulda, coulda, woulda."
Should Have:
Should have won more conference games. Lost to then-No. 2 Montana State 24-17 on a late Bobcat touchdown — hard to say that's a should have won game, but SUU missed an opportunity for a go-ahead field goal in the first, and couldn't push the ball in the end zone at the end.
Then, SUU lost at home to Sacramento State 27-22 after taking a 16-3 lead into halftime and having all the momentum, only to fall flat in the second half. The lowest point came Oct. 20 in a 24-22 loss at home to previously winless Weber State. Had SUU converted a 2-point conversion at the end, the T-Birds force overtime. Regardless, the T-Birds had no excuses for that one.
Finally, SUU fell to North Dakota 33-29 last week. In that one, SUU jumped out to an early 15-0 lead, but couldn't hold that the rest of the way. In the end, Brad Sorensen led the T-Birds down the field for the go-ahead score, only for SUU to turn the ball over near the red zone.
Could Have:
In all, SUU's four conference losses totaled 18 points – each decided by 7 points or less. It's not at all farfetched to believe if SUU wins at least three of those four previously mentioned games, SUU is a playoff team — given the other results from the season. Even if the T-Birds failed to beat Montana State, SUU would have an 8-3 resume to work with, and two of those losses were to FBS opponents (one bowl eligible and the other a Pac-12 member). The T-Birds would have wins again Eastern Washington, Northern Arizona and went 7-1 in Big Sky play. But, sometimes you just have to learn how hard it is to compete in the Big Sky first.
Would Have:
Had should haves and would haves come together in a harmonious world of T-Bird excellence, SUU would have been a playoff team, but more importantly would have shut down anyone who thinks the T-Birds aren't ready for the Big Sky.
A loss to Weber State hurt that value SUU had, but regardless, I think winning at NAU and defeated then-No. 1 Eastern Washington will surpassed anything lost in the Beehive Bowl. I'm fairly certain at least 80 percent of the Big Sky has decided SUU's entry into the conference is "legit."
First Year in the Big Sky grade: B-
Reason: SUU had amazing wins over EWU and NAU at the end, but underachieved as a whole this season. For example, losing at home to Sac State 27-22, winning at Montana 30-20, losing at home to Weber State, defeating EWU 30-27, losing at North Dakota 33-29, only to win at NAU 35-29 in triple OT. SUU played pretty much at the same level of play as last season, but failed to maintain momentum of key wins at Portland State, Montana and at home with EWU. Great teams are machines, good teams don't let down after every big win and underachievers show up whenever the hell they want. It's clear SUU was a big threat, but underachieved as a whole.
Future: SUU's future will be interesting. SUU will have to replace its greatest offensive threat in school history, likely leaving J.J. Mayer or Austin Young to fill the shoes. Mayer has the experience in the offense, as Sorensen's backup for the past three seasons, while Young has the explosive arm that turns heads in practice. That may turn into an interesting battle in the spring. 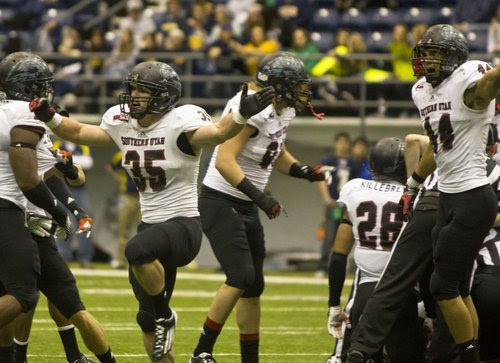 Zak Browning (left) has turned into the future of the T-Bird defense. by Carter Williams
Whoever wins the quarterback job will also benefit from having all of SUU's significant receivers back, but will have someone new in the backfield with Myles Crawford-Harris, Henna Brown and Brian Wilson all graduating. SUU's defense, which was primarily freshmen, will lose the senior captain in Larsen, while Mike Needham has been rumored to be leaving to serve an LDS mission. 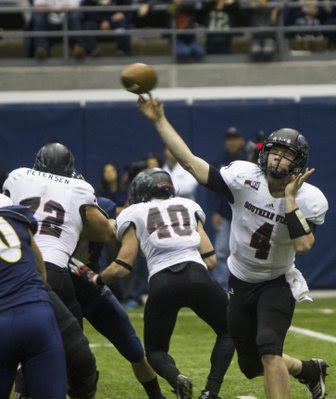 The Jets need a quarterback... just saying. by Carter Williams
As for Larsen and Sorensen, a chance of a pro career is closer than probably any of the other seniors. NFL Draft Scout lists Sorensen as the 10th best quarterback of 137 possibilities in the 2013 NFL Draft, and a good workout, combine or anything else in the future could help Sorensen rise further. I've counted at least a dozen teams who have had scouts over to look at him. His stock ranges anywhere from the third to the sixth round from what I've heard. If he's not drafted, he's probably going to be the first quarterback to get a call for an undrafted free agent invite. Larsen will likely be an invite to the NFL after the draft. He's currently listed as the 48th (now 28th) best defensive tackle of 196 DTs by NFL Draft Scout.