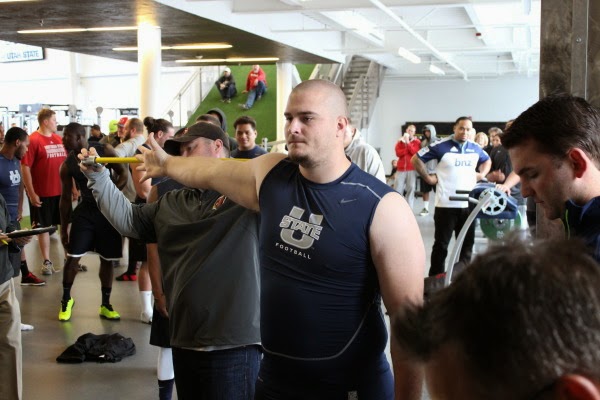 Pro Day began in the USU Strength & Conditioning Center, where players had their height, weight and wing span measured, followed by performance tests in the broad jump, vertical jump and bench press.

The remaining drills were performed in Utah State's San Laub Indoor Practice Facility, where players were timed in the 40-yard dash, shuttle run and three-cone pro agility run, along with other on-field tests.

"I definitely feel like I've improved since the Combine," said Lawson. "My goal was to come out here and improve my numbers and performance in every aspect and I know I did that."

"Today went well, I'm excited," said Pataiali'i. "I talked to my agent and he said my numbers are some of the top numbers from the Combine this year, so hard work pays off. I've put in a lot of hard work over the last few months so this was the time to show it off and show the scouts that I can be a top-caliber player for their organization."

Utah State's four players who participated in the NFL Scouting Combine - Alexander, Larsen, Lawson, Tialavea - sat out most tests Tuesday, but did participate in position drills.

Players will now wait for the NFL Draft, which will take place Thursday through Saturday, May 8-10 from Radio City Music Hall in New York City. Round one is on Thursday, May 8. Rounds two and three will be on Friday, May 9 and round four through seven will be on Saturday, May 10.